To Adapt Is To Succeed 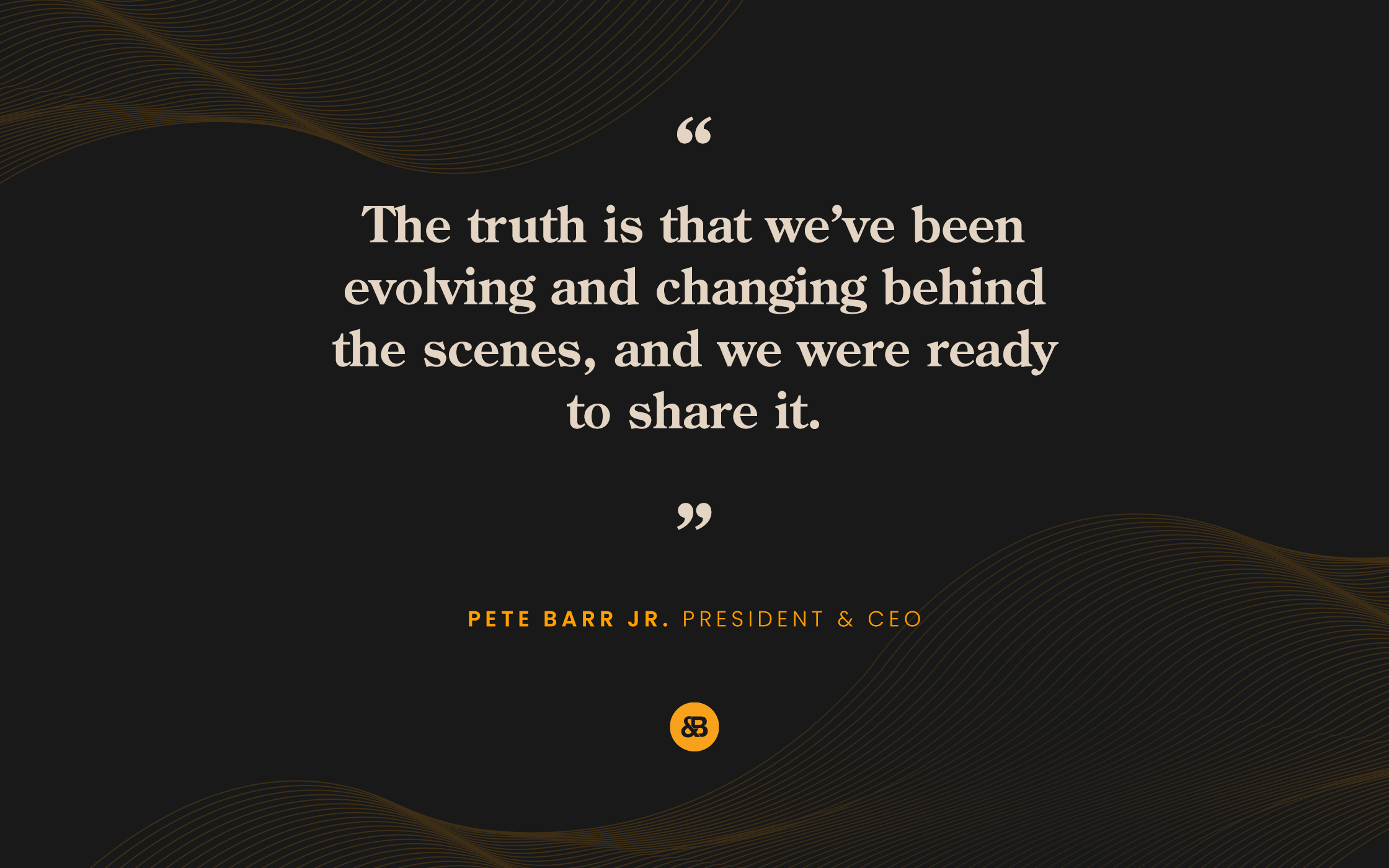 2022 Brand Refresh: To Adapt Is To Succeed

Author’s Note: Some stories aren’t meant to be written by just one person. History certainly hasn’t been. And that’s what this is: you’re reading a piece of history. This is a carefully recorded and caringly reported conversation between colleagues—and friends. It’s a transcript of shared thoughts because that’s exactly what this rebrand is.

So, join the conversation, we saved you a seat.

On The Importance Of Adapting

Christian Wojiechowski, Creative Director : Some rebrands just happen for the sake of rebrands. That’s not what this is.

Douglas White, Chief Operating Officer : Yeah, some companies seem to force innovation, like it’s fashion. Like they’re trying to keep up with the times, trying to be something they’re not.

Christian: How did we know if our brand’s DNA would be strong enough to embrace this change? We had to start digging.

Douglas: The best companies survive by changing. And companies thrive when they adapt. When they put in the work internally to better themselves. People need to see if companies are making those changes. That’s when rebrands really matter. That’s why ours really matters.

Pete Barr Jr., President & CEO : Exactly. The truth is that we’ve been evolving and changing behind the scenes, and we were ready to share it. But we asked ourselves: How do we do it smartly? And how do we stand out in a sea of the same?

Christian: As it turned out, our queries were quickly answered by something great. Together we found it. We found our truth.

Kenzie Estes, Art Director : There was so much pressure that went into refreshing a brand that’s been around a while.

Meg Rosenoff, Senior Copywriter : What’s funny is that it’s almost the epitome of a “coming of age” story. We knew what we believed in and what we stood for, but we didn’t know what outfit to wear.

Kenzie: Could we update a decades-old brand to be interesting to today’s audience? Could we stay true to ourselves even with a new look? Even the slightest visual tweaks can elevate a brand’s look in a big way.

Douglas: You know, I’ll admit that when I first saw this new brand, I quickly realized we didn’t look as refined as we should. I didn’t necessarily understand what refined was. I think what we have now is simple and smart—and stunning. Having no buttons on a phone was bold and weird at a time when every other phone had at least 12 buttons. Turns out, to simplify is to advance.

Kenzie: And that design stood the test of time. From an art direction standpoint, the way we did this rebrand has allowed the brand to adapt over time. We’ve been so thoughtful in how we’ve created a timeless look that will age beautifully. No trendiness, just timelessness.

Meg: Yeah, this isn’t a case of a creative team doing what they think is cool. It’s not about us. We work for the process. We practiced so much restraint in this process, we were simply stewards of the “client”, of this brand that means so much to so many people. We approached it with empathy, like we do for all our clients.

Christian: We were able to do this gracefully because it’s in our nature to adapt. We adapted from pencil to stylus years ago. Who knows what we’ll adapt to tomorrow. There are some people who won’t get it. But what it means to the people who really do care, who do get it, is everything.

On Believing In Ourselves

Pete: You know, I’ve been doing a lot of thinking about the past 10 years. In 2015, we changed our name from Fry Hammond Barr to &Barr, some of you out there still call us “Fry” to this day. And you know, when we did that, I felt a little lost. I wondered if everyone, including myself, would identify with this new brand…well I can tell you now, without a doubt, that there’s never been more pride. In every department, at every level. People really believe in what we’re doing here.

Douglas: Yeah it seems like when we did the first rebrand years ago, we were still growing into maturity. Maybe we were awkward teenagers then, but it feels like we know who we are now. We’re proud. We’re confident in what we believe. Our values are defined and expressed in a way they never have been before.

Pete, laughing: You know Doug, you’re a better listener than I give you credit for. The thing is, we wouldn’t be ready for this brand refresh if we hadn’t gone through what we did over all these years.

Christian: I think it all started when we wrote down our Mission, Vision and Core Values. Yes, we’d had them before. But not in this new state, coming from the heart like it did now. We did it during the pandemic, when we could have chosen to be at our lowest. But it just seemed to flow out of us. Once we had those words on paper, it felt like we needed to show that through our brand.

Meg: To capture the voice of so many is a challenge. To find the thread of belief that ties people together is what defines good writing. Capturing shared emotions and experiences with words. The thing is: the beliefs were clear to me. The thread of connection was there. All we had to do was bring it to life.

Kenzie: Up until now, I felt like we didn’t know who we were, visually, even if we all believed the same thing. Maybe there were too many cooks in the kitchen, or too many cooks with different tastes. I loved the concept of what &Barr’s name means, but I felt the way we were representing ourselves graphically didn’t align with the current goals of the company.

Meg: Exactly, creatively, there was a disconnect for us. We got an assignment to create a style guide for the brand. But we felt the ways we were representing ourselves didn’t add up. We had to be our own client, and in turn, be our own agency. It was time we walked the walk.

On The Theory Of Water

Christian: When the team came to me with this theory, I got chills. I still do. The concept of water awakened this theory of &Barr.

Meg: Water is the poster child for adaptation. It’s the way water changes that fascinates me as a creative. Water knows who it is. It’s always two hydrogen, one oxygen—no matter what state it’s in. That’s &Barr. We’ve changed a lot over 65 years, but the essence of who we are has always been there.

Christian: Yes, the DNA. Always the same, no matter how we’ve looked.

Meg: Water takes the shape of whatever it’s in—as a company should.

Kenzie: It’s the different states of water that inspired so much of the design for this rebrand. The wave, the dew drop, the ice cube. The rainbow especially means something huge for us. All of the droplets of water have to come together to create this prism of color. They’re nothing without each other.

Pete: Besides the fact that water connects us so much to our home state, to our clients, to the lake we proudly sit on, I personally find so much peace on the water, on my boat. I always have.

Christian: But like great marketing, water is destructive, even chaotic. But it’s beautiful. Always so beautiful.

Pete: You know, when I think of water, I think of life. And maybe the next thing I think of is power. I don’t think there’s anything as powerful as water.

Douglas: Yeah, you can’t stop water. It will go where it’s intending to go. Modern man has tried to stop it, but water will always overpower us in some way. The only way to succeed is to ride the wave.

On Being In Business For 65 Years

Christian: 65 years is a long time. Especially when it comes to advertising. But in the grand scheme of things, it’s a blink of an eye. For us, it’s a lifetime. It’s everything that’s in between.

Meg: Did you know this company has been around longer than Disneyworld? That’s mind-boggling to me. To be somewhere that so many people have touched, and for my team to be at the helm of this project, means so much.

Pete: You know, I think our founders, Chuck, Bob and Pete would be very proud of what we’re doing right now. They were all original Mad Men, the true ad guys of their generation. Between Chuck and Pete, Chuck was more progressive; he was very empathetic. He was always more open-minded than my dad. Chuck was fascinated with technology, even back in the 80s and 90s. My dad was always stubborn with opinions, among other things. (laughs) If he were in this room right now, he’s simply want to know “Will this make us more successful?” And of course it will, he would say. The work speaks for itself.

Christian: Why do we do what we do? Why do we push ourselves to emotional and intellectual limits for our work? Because we simply want to change lives for the better. Change a life, even for an instant, and become memorable beyond compare.

Douglas: We could have just changed our name and hoped for the best, but we needed something to take root. The brand has changed. In a deeper way even. We have shared goals and responsibility like we’ve never had before.

Christian: Exactly. It’s not about updating low hanging fruit. It’s about defining the essence of who we are and the theory of what we do. It’s the mantra.

Pete: My wife and I planted some new trees in our yard recently. It’s been about a year, and they’ve seemed to finally take root. And you know what they have on them now? Little buds. And you know what those buds will be in a while? Fruit. I feel like when we put this “plant” of &Barr in the ground back in 2015, it took a while to take root. But we watered it, we have people who love it taking care of it. A tree doesn’t bear fruit in its first year, or even its 5th. It bears fruit when it’s ready. When it’s loved. And I’ll tell you something: this place, this brand, is loved by so many. And now, we can enjoy the fruit of our labor.